Our scientists are working on a laser water vapour sensor

Our physicists are working on an innovative optical water vapour analyser that will significantly reduce energy consumption and will be much cheaper than similar solutions currently available on the market. Research will be conducted jointly with scientists from Wrocław University of Science and Technology and the Technical University of Berlin. The project will be implemented by companies from Poland and Germany. 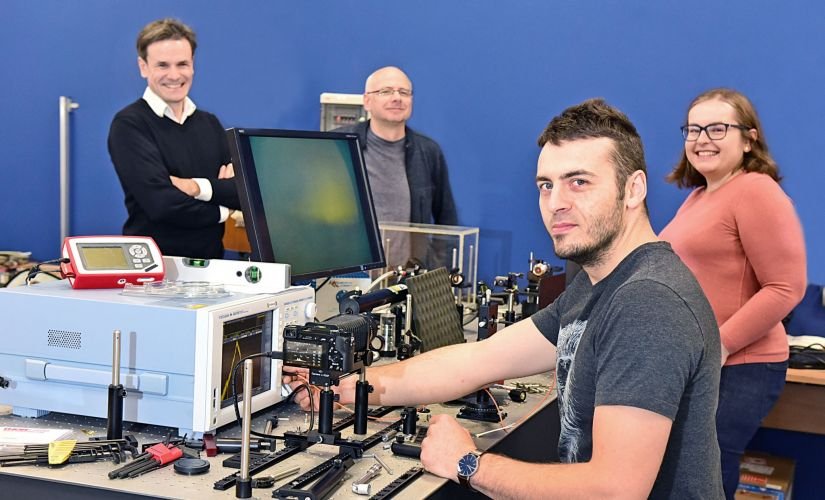 The leaders of the QD-Sense project - "Low-cost gas detection systems based on a tunable VCSEL array of lasers with active regions in the form of quantum dots and mirrors in the form of subwavelength diffraction gratings" are researchers from the Institute of Physics, Faculty of Technical Physics, Information Technology and Applied Mathematics. The funds for the research were obtained in the National Centre for Research and Development (NCBR) competition as part of Poland-Berlin/Brandenburg cooperation. The programme supports development and innovations in the field of photonics, which is one of the strengths of physicists from TUL.

- The project involves the development of a laser water vapour sensor using array of lasers type VCSEL (vertical-cavity surface-emitting laser) with active regions in the form of quantum dots. The system will be characterised by high accuracy and will enable detection of small concentrations of water vapour in industrial applications during technological processes. In addition, by using the VCSEL array of lasers instead of lasers type DFB (distributed feedback lasers) typically used in such systems, the cost of the detection system will be reduced by 50-70%. Currently, the price of DFB laser ranges from 10 to 40 thousand dollars and the price of the VCSEL array of lasers from 10 to 100 dollars – explains Dr Eng. Marcin Gębski, leader of the project from the Institute of Physics.

The innovative system developed by researchers from Lodz University of Technology will also allow for a much wider application, which will result in an increase in efficiency and safety standards and will enable more accurate monitoring of the environmental condition in industrial processes. Water vapour is one of the most commonly monitored elements in industrial processes and their by-products. Determining the humidity level is essential in the control of technological processes in energy, chemical, petrochemical, wood, paper, and steel industries.

The VCSEL array of lasers with MHCG (monolithic high contrast grating) mirrors and active regions in the form of quantum dots is designed to allow broad tunability of the light wavelengths emitted by lasers, which is ideal for spectroscopic applications. By varying the wavelength of light emitted by lasers and recorded by detectors, gases that absorb radiation of a specific wavelength are detected.

-  The project will use an original concept of MHCG (monolithic high contrast grating) mirrors, which is the foundation of the doctoral dissertation by Marcin Gębski, Ph. D. Due to this type of mirrors, it is possible to produce the VCSEL array of lasers emitting different wavelengths of light on a single semiconductor wafer. Until now, with the use of standard DBR (distributed Bragg reflectors) laser mirrors, the fabrication of such arrays has been based on the physical assembly of lasers on different semiconductor wafers. This approach is more expensive than an array made on a single semiconductor wafer. However, it is still much cheaper than the aforementioned DFB-type lasers - explains Professor Tomasz Czyszanowski, head of the Photonics Research Group at TUL.

The Polish-German research and implementation project involves: the Technical University of Berlin (Technische Universistat Berlin) - responsible for manufacturing of semiconductor wafers of VCSEL lasers with quantum dots and implementation of MHCG mirrors, Wrocław University of Science and Technology (Politechnika Wrocławska) for analysis of quantum dot properties and German companies: JCM, Epigap and Eagleyard. The first one will be responsible for modelling optical phenomena in laser structures, and the other two for manufacturing of laser chips. The Polish company Airoptic will focus on the implementation of the water vapour detection system, while Lodz University of Technology (Politechnika Łódzka) will coordinate the project and be responsible for the design of VCSEL lasers and their arrays.